Learn how to use the admissions funnel and current counts feature on your SchoolAdmin dashboard.

Written by Jessica Yates
Updated over a week ago

The Admissions Funnel and Current Counts are great ways to view, at a glance, your total numbers, yield, and current counts for each stage of the admissions and enrollment process.

These can both be found on the Dashboard, which is typically the first page you see when you log into the Admin Portal. You can also access the Dashboard by clicking on the dial icon in the upper left of your SchoolAdmin site.

Learn more about these features by reading on below or watching this short video.

How-To: Use the Admissions Funnel

The Admissions Funnel, located within the Dashboard, is where you can quickly and easily view your key admissions metrics, according to the Term selected from the drop-down menu at the top of the page. It automatically tracks the real-time cumulative totals of your:

You can click on any of these cumulative numbers in the center of the funnel to open a list of contacts in Search & Reports. Please note: The cumulative numbers include any contacts that have been in a particular status at any point in time. For example, your number of Applicants in the funnel will include anyone currently in an Applicant status for the selected term, as well as anyone previously in an Applicant status in the current term, who has since moved on to other stages of the funnel. 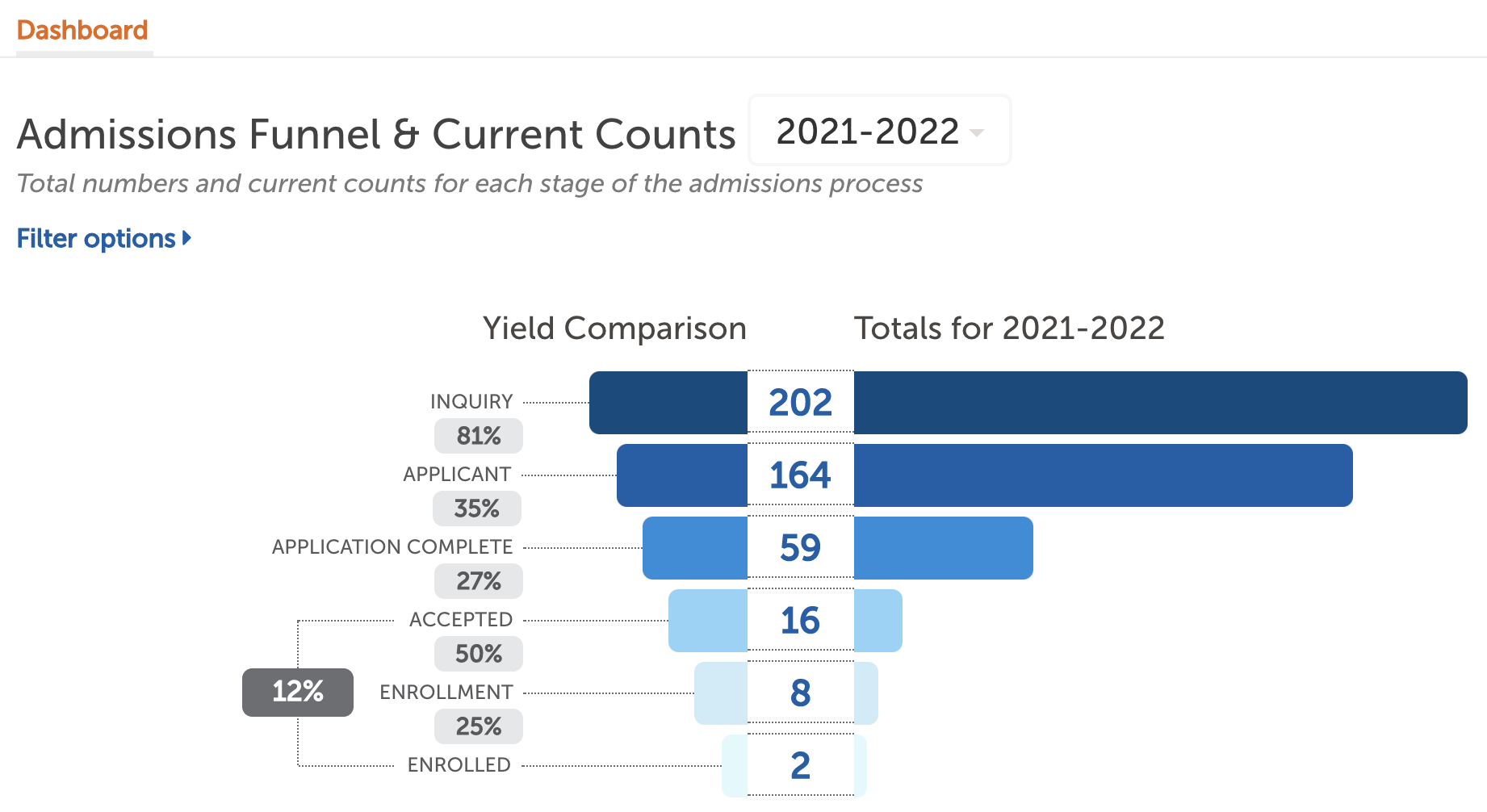 To the left of the Admissions Funnel and cumulative numbers, you can see important statistics calculated for you, known as the Yield Comparison. These percentage values are derived from the previous status. 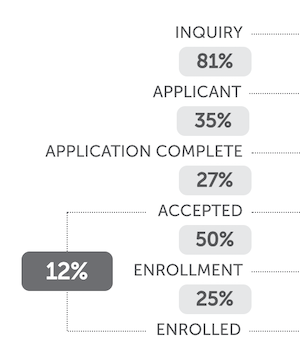 In the example above, we can see that 81% of our Inquiries became Applicants, and of those Applicants, 35% became Application Complete. All percentage values can be clicked on to populate the list of contacts included in that count within Search & Reports. The percentage value in dark grey (12% in the example above) is your Yield, which is the number of Applicants that became Enrolled, as indicated by the dotted line connecting these two statuses with the yield percentage.

How-To: Use the Current Counts

Below the Admissions Funnel are your Current Counts of those progressing through each stage of the admissions and enrollment process. Current counts display how many contacts are currently in that particular status right now. This section will include both standard statuses, as well as any custom statuses you have created. 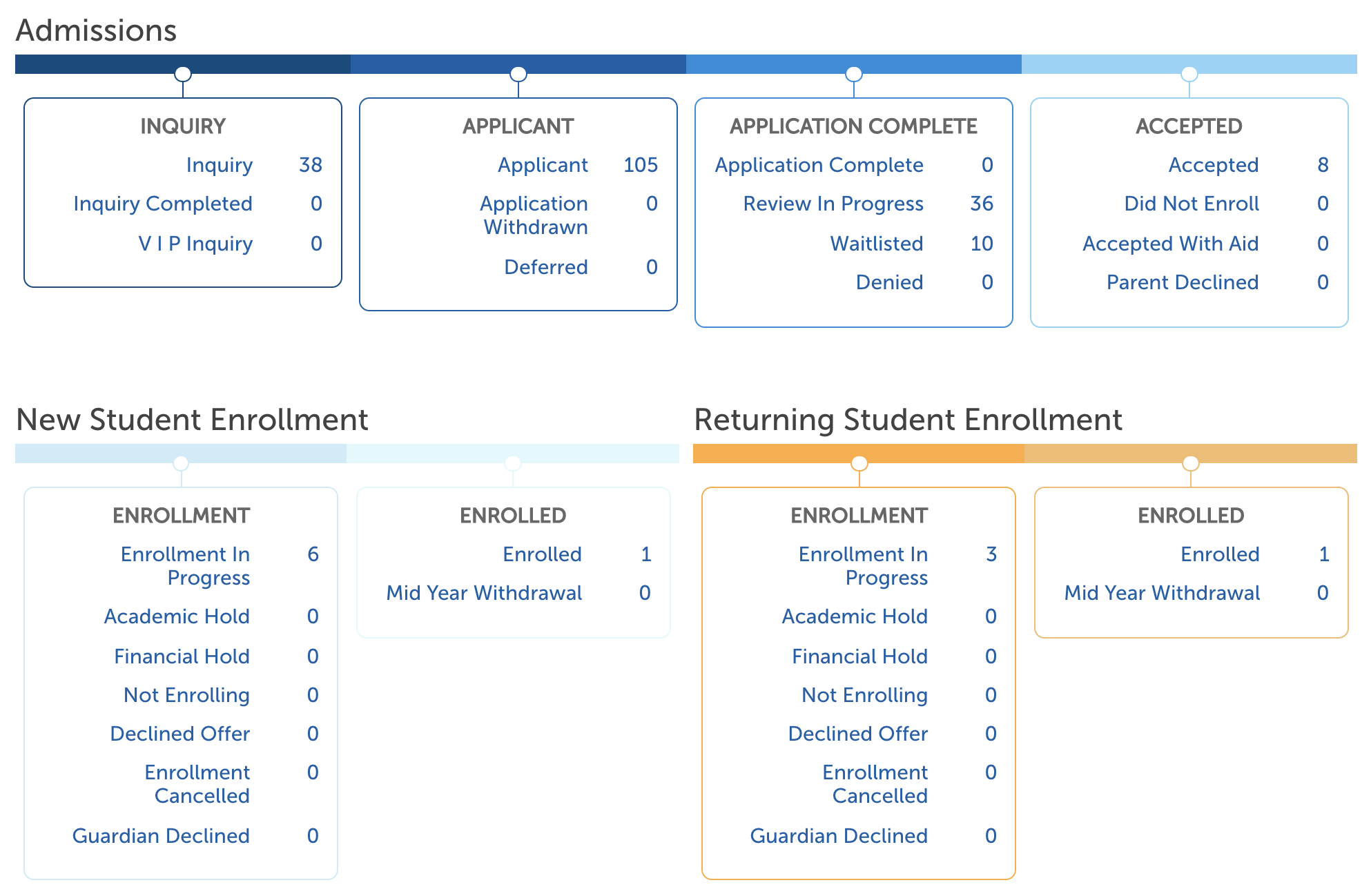 You can click on any of the statuses or the numbers next to them to open a list in Search & Reports of contacts who are currently in that status. This means that the contact list will not include anyone who was previously in that status but since moved on to a different status.

Did this answer your question?